Everyone at Mt. Tabor Builders wishes you and your family a happy holiday season and a prosperous New Year!

This is a great time of year for us at Mt. Tabor and we hope it is for you too. We hope you get to find time to spend with friends and family. We also hope you find time to slow down and relax, while thinking about the highlights of the past year.

This is also a great time to say “thank you” to all of our clients, who were among the highlights of our year. We look forward to serving you again in the future. We hope and pray the new year is a great one for all, and that peace and goodwill prevail.

To find out more about Mt. Tabor Builders Inc. or to ask questions about building your dream home in 2019, contact the office through our website or call the office at 301-766-7161 to schedule a meeting. We also do whole-house remodels; build major additions; and design and build outdoor living spaces.

And while you’re waiting for ol’ St. Nick and the New Year to arrive, enjoy some interesting holiday trivia.

1) When was Christmas originally celebrated?

A: January 6th. In the West, Christmas was always celebrated on the 25th of December. Consequently, except for a select few, almost everyone who celebrates Christmas does so on December 25th.

2) In what century was the first written use of Xmas?

3) The modern Santa Claus is mainly a mix of what two historical figures?

A: Saint Nicholas and Father Christmas. St. Nicholas was a Greek bishop who lived in the 4th century and was famous for his generosity and gift giving. Father Christmas dates back to the 16th Century and is widely considered synonymous with the modern Santa Claus.

4) The four sides of a dreidel display the letters Nun, Gimmel, Hey and Shin, mnemonics for the phrase Nes Gadol Hayah Sham. What is the usual translation of this phrase?

A: A great miracle happened there. The letters then were given significance as forming a mnemonic for this phrase, a reference to the origins of the Hanukkah celebrations. This phrase refers to the miracle by which a single day’s worth of sacred oil burned for eight days, while a fresh batch could be prepared during the re-dedication of the Temple.

5) What was the poem “Twas the Night Before Christmas” originally titled?

A: A Visit from St. Nicholas. It was anonymously published in 1823. It has been attributed to, and claimed by, Clement Clarke Moore. There is some controversy as to whether he is the author. 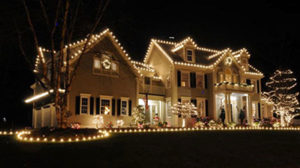 A: Thomas Edison. In 1880 Edison put up the first Christmas display made from electric lights to advertise his light bulbs. A few years later an inventor named Edward Johnson, Edison’s colleague, created the first string of electric Christmas lights.

7) How long have people celebrated the new year?

A: 1904. The first Times Square celebration had to do with The New York Times, because the iconic paper was celebrating its new headquarters. At the time, the Times tower was the second-tallest building in Manhattan. The celebration involved a street festival that lasted all day, which ended in a show of fireworks. More than 200,000 people were in attendance.

9) When did the famous ball become part of the celebration?

A: 1907. The first Ball weighed 700 pounds and had a diameter of 5 feet. It was constructed of wood and iron, and had one hundred light bulbs on it.